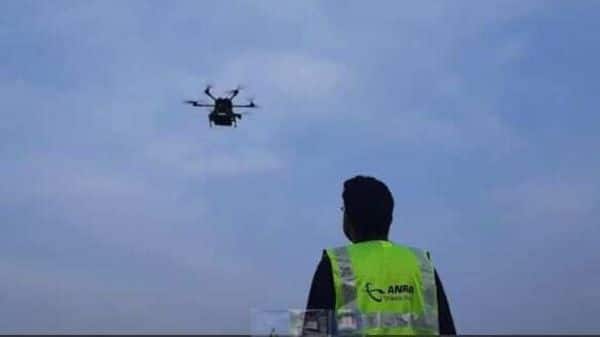 The trials were part of a project awarded to the companies by the Directorate General of Civil Aviation (DGCA) and Ministry of Civil Aviation, and will help prepare for the next set of drone rules for Beyond Visual Line of Sight (BVLOS) operations. The companies claimed that this was the first time such missions had been carried out in India.

BVLOS refers to a type of drone mission where the unmanned aerial vehicle (UAV) goes outside the usual visual range of the pilot. They require complex technologies, mapping and more in order to be carried out successfully.

The two companies said that a total of 352 drone trials were conducted for over 100 flight hours, which covered 1,100 kilometres of “incident free operations”. The multirotor drones used ANRA’s SmartSkies CTR and SmartSkies DELIVERY platforms. The two platforms provide drone operators with tracking, monitoring, deconflicting and other information crucial to conducting low-altitude BVLOS missions.

The tests were conducted by ANRA’s flight team at the Indian Institute of Technology- Ropar campus in Punjab and in Uttar Pradesh’s Etah district.

“The recently concluded pilot will help pave the way for usage of commercial drones in enabling the middle and last mile journey for our consumers,” said Dale Vaz, chief technology officer (CTO) of Swiggy. The companies said that the project was meant to help develop “independent, self-directed, and scalable” systems to manage and monitor BVLOS drone operations at scale.

BVLOS operations require operators to factor in information on terrain, possible obstacles, airspace traffic, weather, and more. The system used by Swiggy and ANRA makes this information available to service providers and can send notifications to external stakeholders, including government agencies and public safety bodies.

Further, the companies also said that the system can ensure that only authenticated and approved drones are allowed to fly in the airspace. ANRA’s unmanned air traffic management (UTM) system was provided to government stakeholders, including the Indian Air Force, to provide real-time situational awareness, monitoring and approval of these experiments.

“ANRA and Swiggy worked very hard to get drone deliveries off the ground in India, collaborating with numerous government stakeholders, and other partners. Not only did we demonstrate the commercial viability of drone deliveries, we also developed and validated an entire technology stack to support operations at scale,” said Amit Ganjoo, Founder and CEO of ANRA. “We look forward to continued collaboration and development towards a near future where drones reach millions of citizens across India, delivering food, vital medicines and other goods.”