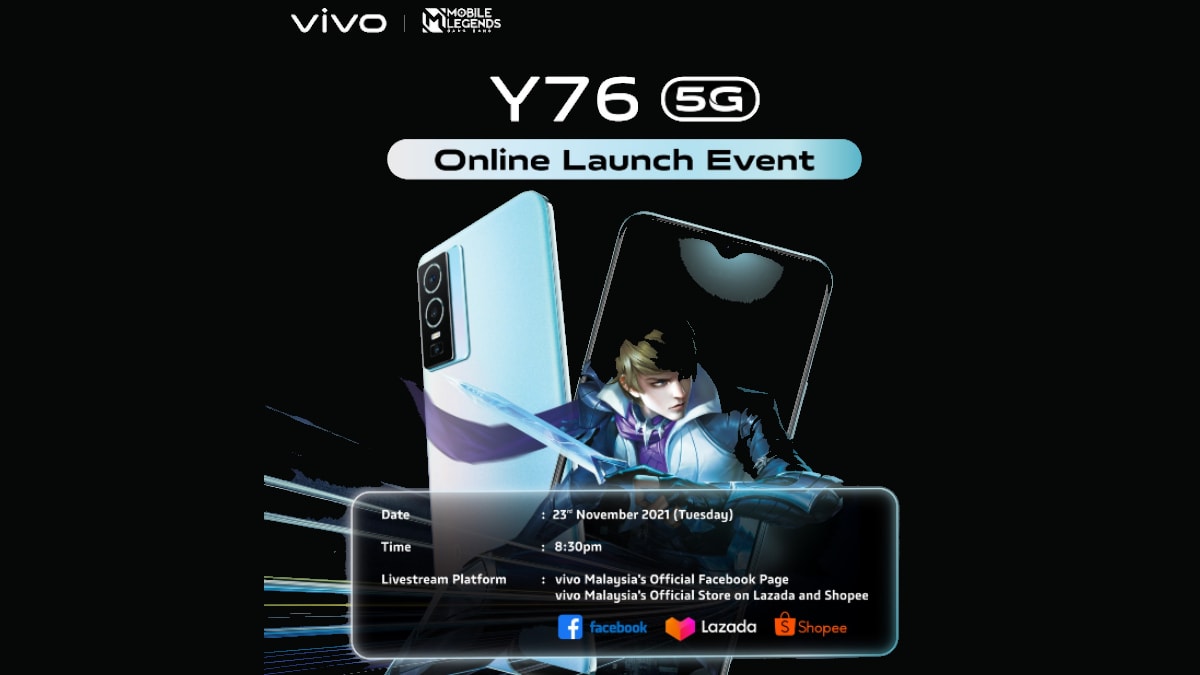 Vivo Y76 5G launch date is November 23, the company has confirmed. Ahead of its debut in Malaysia, design and key specifications of the latest phone in Vivo’s Y series have been revealed via a teaser. Some Vivo Y76 5G phone specifications have also been tipped online. The smartphone is said to be available in three colour options. The Vivo Y76 5G will come just days after the launch of the Vivo Y76s 5G in China. Both phones look similar in design, but their specifications are likely to differ.

Vivo Malaysia via its Facebook handle has teased the arrival of the new Vivo Y76 5G smartphone. The virtual launch event will take place on November 23 at 8.30pm MYT (5.30pm IST). The event will be livestreamed by Vivo Malaysia on its social media channels. The Vivo Y76 5G will go on sale in the country via e-commerce sites Lazada and Shopee. The phone’s availability in the other markets including India is yet to be announced.

The smartphone is teased to feature a waterdrop-style notch display and it is shown in a black colour option. The Vivo Y76 5G is confirmed to have a triple rear camera setup inside a rectangular module along with a flash. The camera unit houses a 50-megapixel main sensor, a 2-megapixel portrait shooter, and a 2-megapixel macro snapper. Other specifications are not revealed by the company.

Separately, known tipster Sudhanshu Ambhore (@Sudhanshu1414) has posted images of the Vivo Y76 5G along with some key specifications of the device. According to the tipster, the upcoming phone will feature a 6.58-inch full-HD+ LCD display with a 60Hz refresh rate. Other highlights are said to include a MediaTek Dimensity 700 chipset coupled with 8GB of RAM (4GB extended RAM) and 128GB of onboard storage. The tipster also says the phone will have a 16-megapixel selfie camera.

Key specifications of the smartphone include 6.58-inch full-HD+ (1,080×2,408 pixels) display, MediaTek Dimensity 810 SoC, and dual rear camera unit including a 50-megapixel primary sensor and a 2-megapixel macro shooter. The onboard storage of Vivo Y6s is expandable via a microSD card (up to 1TB). The handset also features a 4,100mAh battery that supports 44W Flash Charge fast charging.