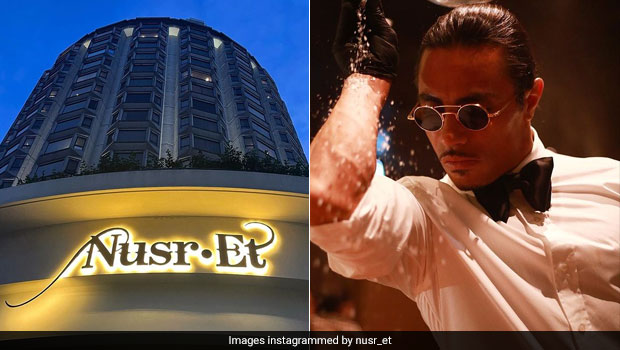 Remember the famous meme called ‘Salt Bae’ that went viral on the internet in 2017? The image showed a chef sprinkling salt on meat – an image that was widely circulated resulting in overnight stardom for Turkish chef Nusret Gokce. Since then, Nusret has opened up a restaurant franchise at exotic locations across the world. The latest addition to this chain is a new eatery inaugurated in London on 23rd September 2021. He announced the opening of the eatery on his Instagram handle with a post. Take a look:

“Opened at the heart of the world 23.09.2021,” he wrote in the caption. The pictures and videos showed the Nusr-Et restaurant in London, with Salt Bae cutting meat and sprinkling salt on it in his trademark style. However, the apparently glamorous fine dining restaurant was called out by Twitter users after an invoice from the restaurant surfaced online. A single meal at the restaurant set the customers back by 1800 Pounds or approximately Rs. 1.80 lakh. Take a look:

The exorbitant prices at the Turkish chef’s restaurants left Twitter in shock. A single steak at the restaurant came for a whopping 630 Pounds. Several users also left comments about how expensive the drinks were at the restaurant. Others insisted that these were the usual prices of food in London.

Nine of the Queen’s Pounds for a coke?— Michael Scanlan (@ScanlanWithAnA) September 27, 2021

I am sure he got confused with the exchange rates GBP vs Turkish Lira— Charalampos Tsokanis (@HTsok) September 28, 2021

Just logging back in to say this wasn’t my meal! I would never spend more than £10.50 on a Red Bull— Francisco Garcia (@Ffranciscodgf) September 28, 2021

Interestingly, this is not the first restaurant by Salt Bae to come under flak for the excessive costs. Earlier this year, the Miami outlet of Nusr-Et restaurant had also been called out by many for overpriced food. What did you think of the prices at Salt Bae’s restaurant? Tell us in the comments below.