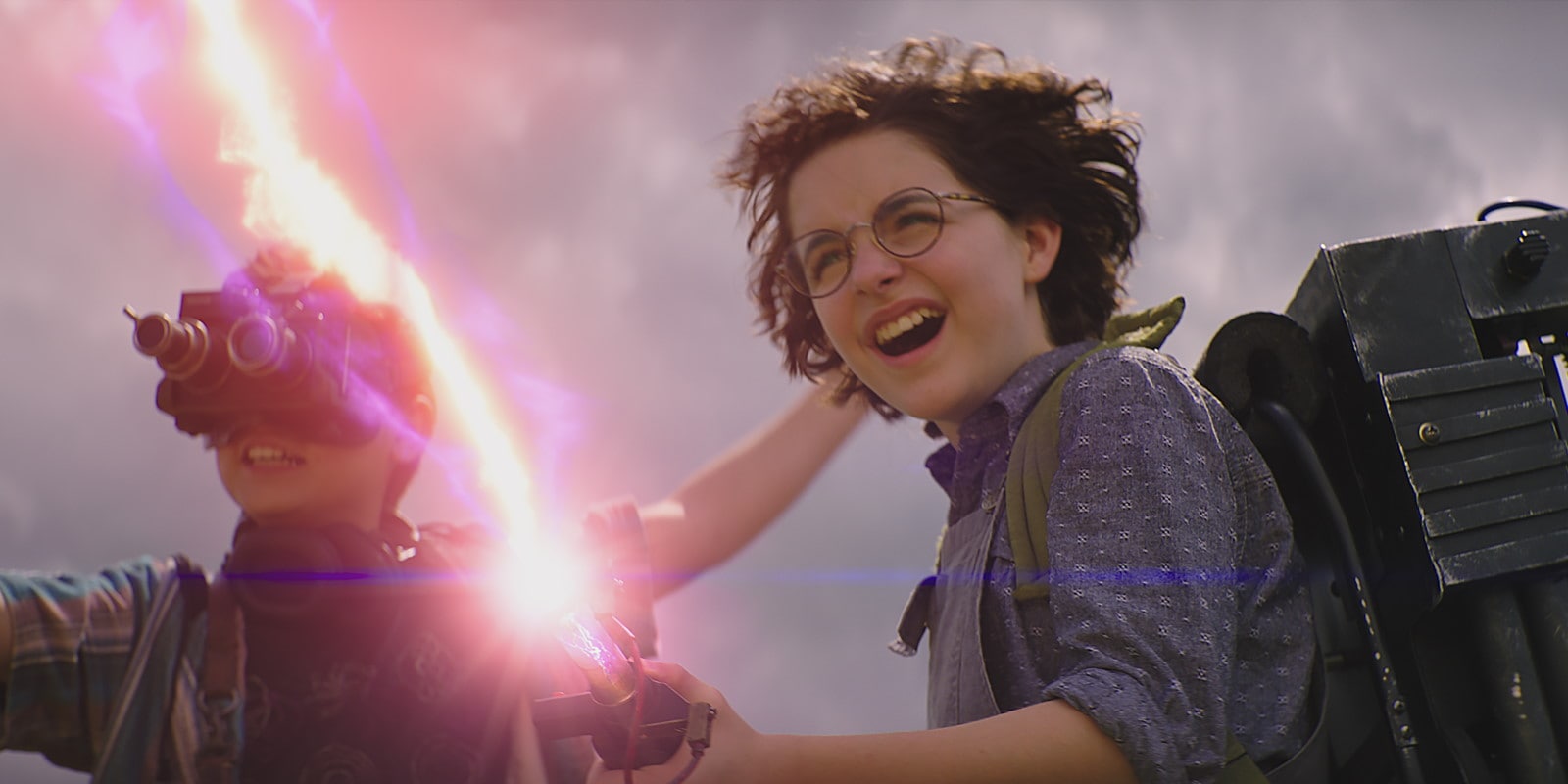 Ghostbusters: Afterlife — out Friday in cinemas — is a movie rooted in the past and created in the image of its contemporaries. There’s a huge Stranger Things spectre hanging over Ghostbusters: Afterlife. After all, the Netflix series is the current pop culture gold standard for kids fighting evil supernatural creatures. Ghostbusters: Afterlife not only abandons the adults-teaming-up formula which the Ghostbusters film series has used so far, director Jason Reitman (Up in the Air) has even plucked a Stranger Things actor in Finn Wolfhard for his kids-driven Ghostbusters. Like the Netflix series, the new Ghostbusters movie takes place in fictional small-town America. Summerville, Oklahoma takes over Hawkins, Indiana. The story is set in present day, but Reitman uses a gimmick to take away all modern technology.

If you are trying to make a safe and calculated soft reboot sequel to a mightily beloved Hollywood original over 30 years later, the obvious blueprint is Star Wars: The Force Awakens. Like J.J. Abrams did in a galaxy far, far away, Reitman hits a lot of the original film’s beats — except with new characters in new settings. Like Abrams, Reitman scatters Ghostbusters equipment which audiences have a nostalgic attachment with across Ghostbusters: Afterlife. The Ectomobile car is the Millennium Falcon, the proton packs the lightsabers of this world. The original gang is back too, though unlike in Star Wars, they aren’t legends here but rather largely forgotten. A primary villain returns — played by a new actress — in a useless capacity, akin to Star Wars: The Rise of Skywalker.

Ghostbusters: Afterlife isn’t as slavish to its original film as The Force Awakens was, but it’s also not nearly as enjoyable. For what it’s worth, Reitman tries to carve out a new voice for the Ghostbusters series — abandoning New York City and the dry Bill Murray-style wit for a family-friendly adventure like Steven Spielberg used to make (that Abrams nicely mimicked with his Super 8). He tricks out the Ecto-1 with a swing-out gunner seat and a floor hatch which releases a remote-controlled ghost trap. It’s cool, though I found it hilarious how the RC trap kept up with the Ecto-1’s speed.

From Eternals to Dhamaka, What to Watch in November

But Reitman uses these elements to do what the original Ghostbusters did; there’s a Slimer action sequence though it’s now blue and called Muncher (voiced by Josh Gad, Frozen’s Olaf). And instead of a giant Stay Puft Marshmallow Man terrorising New York’s residents, we get a bunch of tiny ones in an empty Walmart who make merry by melting, roasting, blending, skewering, and sandwiching one another. Troublingly, Ghostbusters: Afterlife doubles down on the nostalgia towards the end — which undoes the good work that Reitman signals at for most of his film.

Set over three decades after the events of the first film, Ghostbusters: Afterlife follows a family of three: single mother Callie Spengler (Carrie Coon, from The Leftovers) and her two kids, Trevor (Finn Wolfhard) and Phoebe (Mckenna Grace, from Gifted). Yes, they are the daughter, grandson, and granddaughter of the late Egon Spengler (Harold Ramis) who’s killed onscreen following the actor’s demise in 2014. But Egon isn’t remembered fondly by anyone — Callie hates him because he left his New York family and moved away to Summerville never to be seen again, and everyone in Summerville only knew him as the “Dirt Farmer” because the guy tilled his land but never grew anything. But after Egon passes away, the strapped-for-cash Spenglers arrive in Summerville hoping to sell the house.

Phoebe is a really great character. She’s smart, inquisitive, and unperturbed — a born scientist unlike her mother who has no interest in science, possibly because it stole her father away. But Phoebe also struggles to make friends. It likely doesn’t help that her (nerdy) jokes aren’t for everyone. She doesn’t process emotion like others, she admits (is Phoebe autistic? Ghostbusters: Afterlife doesn’t say outright, which I prefer). And neither does she respond to stimuli — as she says, an overexposure to something enthusiastic or terrifying calms her down. That makes her a fearless and uniquely confident character, who’s always eager to explore. She might be billed third due to Coon and Wolfhard’s wattage, but Grace is the real lead here — her Phoebe is the heart and soul of the movie.

After the Spenglers arrive in Summerville, Ghostbusters: Afterlife drops them into their new lives. Phoebe reluctantly starts at summer “public” school where the seismologist Gary Grooberson (Paul Rudd, from Ant-Man) plays movies for kids rather than teach them. There, she makes a new friend in Podcast (newcomer Logan Kim) who calls himself that because he has — you guessed it — a podcast. Meanwhile, in an attempt to woo a girl, Trevor starts working at a diner only to realise the backbreaking work that it entails. Soon they discover that Summerville isn’t just a sad place, it’s also a curious one. Earthquakes are occurring nearly daily, even though Summerville is not anywhere near any fault lines. Phoebe and Podcast start to investigate, with Grooberson’s help.

There are some affecting scenes involving the kids, especially as they try to figure out old Ghostbusters tech. But Reitman is unable to make them play off each other in a manner which would create momentum for Ghostbusters: Afterlife. Podcast is a joy early on — but he becomes a narrative device for the new Ghostbusters movie, akin to Harish Patel’s Karun in the Marvel movie Eternals — as Podcast offers live commentary on their adventures. He’s breaking the fourth wall of sorts, creating a movie out of their lives. Wolfhard is wasted, as he seems to just exist so he can be the new Ecto-1 driver for the gang later. There’s also a bit of leap of logic in how the kids go from knowing nothing about Ghostbusters to getting a grip on all matters fairly soon — I wager there’s a version of Ghostbusters: Afterlife out there that connects the dots more organically.

Annoyingly, Ghostbusters: Afterlife’s adult characters are given even more of a short shrift. Callie’s father issues may be instantly relatable, but that’s only because Coon is a terrific actress. Sadly, she just isn’t afforded much time — it’s a bit of a thankless role for someone who can bring so much to any performance. That’s true for Rudd as well, who is always great in comedic stuff but is working with little here. Not only does Ghostbusters: Afterlife waste Coon and Rudd, it also has terribly useless roles for J.K. Simmons and Olivia Wilde — it will be a spoiler to say who they are playing.

And we haven’t even spoken about the cash-on nostalgic returns of the old gang, including Bill Murray, Dan Aykroyd, and Ernie Hudson. Even though everyone knows about it, Sony has been doing its best to hide them everywhere in marketing. Sadly, they have little to do in the film. In fact, the old Ghostbusters crew probably have more lines and time in the two post-credits scenes, one of which tries its best to tease a future for the struggling Ghostbusters franchise.

The Final Ghostbusters: Afterlife Trailer Is Full of Spoilers

It’s around their arrival that Ghostbusters: Afterlife loses itself. Not only does Reitman go hard on the nostalgia, but the director also opts for an inorganic, sentimental, and saccharine ending. It makes little sense how or why they find their way to Summerville. The climax offers little, recreating shots and dialogues from the original Ghostbusters movie and the start of Ghostbusters: Afterlife. And it tries to best to juice out tears from the fans — it’s unearned and misguided in a desire to put a tidy bow on the whole thing. What makes it more annoying is that Reitman spends much of the film trying to create a new language for Ghostbusters, only to abandon all of that in the third act for a safe approach that screams, “This version tested best with most audiences.”

Reitman also fails to update Ghostbusters for today. Ghostbusters is one of many Hollywood fantasy/supernatural properties that have turned to Eastern cultures — here it’s the ancient Mesopotamian civilisation, Sumer — to create their “exotic” mythologies. Not enough people cared about this in the ‘80s, but this is bordering on inexcusable in 2021. The main villain Gozer, named after a Sumerian goddess, is played by a white woman on Ghostbusters: Afterlife. And Gozer’s only aim is to bring the apocalypse — there’s no larger point to it all. It’s full-on cultural appropriation, for the sole purpose of spicing up a Hollywood film franchise. It feels icky.

For a series that has produced one okay-good film (the original is dated in some ways) and a bunch of cash-grab sequels/spin-offs that are best forgotten, Ghostbusters has an outsized impact on pop culture. Ghostbusters: Afterlife is not even the first attempt to revive Ghostbusters — we had the all-female reboot in 2016 that failed spectacularly, which Reitman chooses to completely ignore as if it never happened. There’s no reference to any of it. And that’s really why it exists — to clean the slate and make room for more sequels. Ghostbusters: Afterlife is a clear attempt to revive the franchise for a younger audience, thereby fitting Hollywood’s target audience and its whole four-quadrant blockbuster philosophy. It’s all about giving Sony Pictures a new revenue stream.

If only Sony was as opportunistic as other Hollywood studios. Watching Ghostbusters: Afterlife, I couldn’t help but feel that maybe Reitman should have fully embraced its dual inspirations: Stranger Things and Star Wars. I’m talking about turning Ghostbusters into a TV series. Stranger Things is good because it has time to flesh out its characters, Ghostbusters: Afterlife could’ve used that. Star Wars has found much success in the pivot to TV (with The Mandalorian) while its films have floundered. But given Sony is lacking its own streaming service in the US, I imagine that thought never crossed their mind.

Ghostbusters: Afterlife is out Friday, November 19 in India and elsewhere.