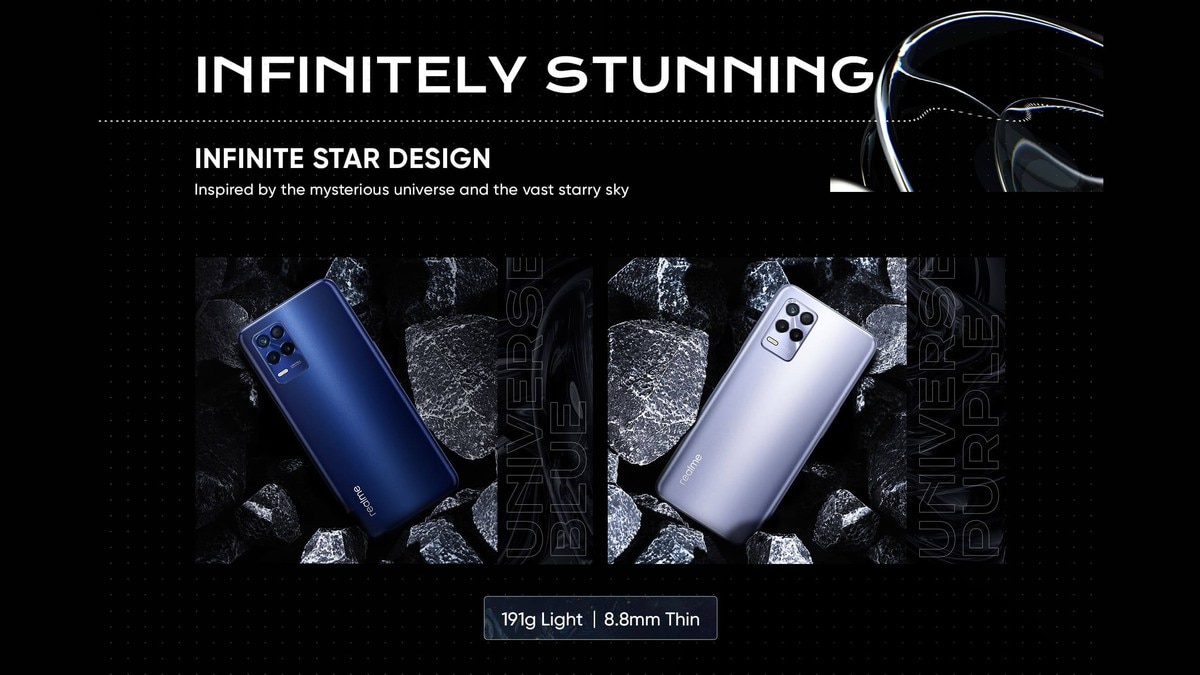 Realme 8s 5G, Realme 8i, and Realme Pad are set to launch in India on September 9, the company announced last week. Over the weekend, Realme announced it is launching two Bluetooth portable speakers – the Cobble and Pocket, launched earlier in Malaysia, alongside the two smartphones. Now, the company has confirmed the colour options that will be available for the Realme 8s 5G, apart from teasing it will feature the MediaTek Dimensity 810 SoC and up to 8GB of RAM. It has also detailed some more features of the Realme 8i. Also ahead of the launch, a fresh leak for both Realme smartphones has surfaced online hinting at some more key specifications of the two smartphones. The Realme smartphones are expected to be launched in two RAM + storage configurations.

As announced in a tweet by the Realme Techlife account, the Realme Cobble and Realme Pocket portable Bluetooth speakers will be launched alongside the Realme 8s 5G, Realme 8i, and Realme Pad at the September 9 launch event that was revealed last week. The two speakers were first unveiled in May.

Realme also confirmed the colour options of the upcoming Realme 8s 5G through a microsite. It shows the smartphone in Universe Blue and Universe Purple colour options. As we mentioned, it also detailed the MediaTek Dimensity 810 5G SoC with up to 8GB of RAM, apart from a new ‘Dynamic RAM Expansion’ feature, that appears to use the storage to augment the RAM, providing up to 11GB total in case of the 6GB RAM model and 13GB total in case of the 8GB RAM model. The Realme 8s 5G will weigh 191 grams and be 8.8mm at its thinnest, the company also teased. In the meanwhile, tipster Debayan Roy (@gadgetsdata) has shared some key specifications for the Realme 8s 5G and the Realme 8i.

As per the tipster, the Realme 8s 5G will offer up to 128GB of onboard storage. The triple rear camera setup is expected to come with a 64-megapixel primary sensor and two 2-megapixel sensors. The sheet shows it has a 16-megapixel selfie camera in the hole-punch cutout of the alleged 90Hz refresh rate Ultra Smooth display. Additionally, it may also get a side-mounted fingerprint scanner. Its 5,000mAh battery could support 33W Dart Charge fast charging.

As for the Realme 8i, its own microsite confirms the MediaTek Helio G96 SoC, which was separately teased via a Twitter exchange between Realme and MediaTek. The microsite also reveals the 120Hz display refresh rate (with 6 presets) on a 6.6-inch display, while touting a 180Hz touch sampling rate and 1-nit night mode.

The tipster adds the Realme 8i may feature up to 6GB of RAM and up to 128GB of onboard storage. It may also get Dynamic RAM expansion up to 10GB. The Realme 8i is said to feature a 16-megapixel selfie sensor in its hole punch cutout. Its triple rear camera is said to feature a 50-megapixel sensor and two 2-megapixel sensors. Realme may pack a 5,000mAh battery that could support 18W fast charging support. The smartphone may be offered in Space Black and Space colour options.

As per a microsite on the official website, Realme Cobble Bluetooth speaker will come with a luminous lanyard. It comes with a 5W Dynamic Bass Boost driver that is claimed to give a deeper and richer bass. The Bluetooth speaker features a 1,500mAh battery, that can be charged via a USB Type-C port, can give a total playback time of up to 9 hours. The speaker also has IPX5 certification for dust and water resistance.

There is also an 88ms super low latency with its Gaming Mode. User can manage the Realme Cobble Bluetooth speaker with the Realme Link App. It will be available in Electric Blue and Metal Black colour options. The former also gets a luminous lanyard. Users can pair two devices for a stereo sound and it comes with three equaliser presets. The features detailed match those of the Malaysian model launched back in May, where it was priced at MYR 99 (roughly Rs. 1,800). We can expect similar pricing when it arrives in India.

The same microsite also mentions some key specifications of the Realme Pocket Bluetooth speaker. It is said to provide a total playback time of up to 6 hours and can be charged via a USB Type-C port. It features a 3W Dynamic Bass Boost Driver. The Realme Pocket Bluetooth speaker also gets IPX5 certification. It also comes with Bluetooth v5 connectivity and weighs 113 grams. As with the Realme Cobble, Realme Pocket users can also pair two devices together for a stereo sound and it comes with three equaliser presets. Realme will offer the portable speaker in Classic Black and Desert White colour options. The features of the Realme Pocket described on the India microsite match those of the speaker unveiled in Malaysia in May — separately from the Realme Cobble. It was priced at MYR 97 (roughly Rs. 1,400), and we can expect India pricing to be around the same.