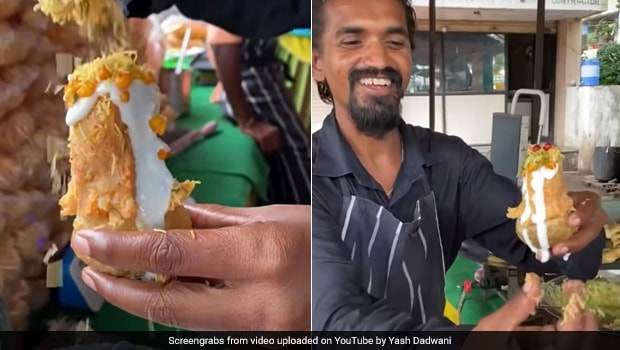 Pani Puri is a street food that enjoys a fan following like no other. Whether you call it Golgappa or Puchka, Batashe or Gup Chup – these different names of the same dish are proof that this chaat item has travelled across the expanse of India. Recently, Pani Puri came into the news when a Bhopal street food vendor decided to offer the snack for free to all his customers to celebrate the birth of his daughter. And now, another unique Pani Puri has grabbed the attention of the internet. This Bahubali Pani Puri in Nagpur, Madhya Pradesh has mesmerised Chaat lovers, and we bet you’ll be intrigued too. Take a look:

Shared on YouTube by popular food blogger Yash Dadwani, the video of Bahubali Pani Puri has received over 31 million views and is also one of the top trending videos in India. The street food vendor featured in the video is Chirag ka Chaska, who is located at Pratap Nagar in Nagpur. He has been in the news multiple times for his unique and interesting take on the humble Pani Puri.

The making of the Bahubali Pani Puri in Nagpur is quite interesting. The dish begins with a large-sized Puri which is then stuffed with a variety of chutneys and Pani. There is an Imli chutney, followed by regular Pani, a seasonal orange-flavoured Pani (replaced by Mango in summers), Jeera (cumin) Pani, and garlic Pani. Then, the potato stuffing which is typically filled inside the Pani Puri was placed on top shaped like a huge cylindrical tower. This giant Bahubali Pani Puri was then topped with curd, boondi, sev, and shelled pomegranate.

The interesting Bahubali Pani Puri seemed quite delicious yet challenging to eat. “You should also make a video on how to eat it,” commented one user. Another wrote, “Can’t believe there is a pani puri in this world that can’t be eaten in one bite!”

What did you think of the Bahubali Pani Puri? Would you try it? Tell us in the comments below.