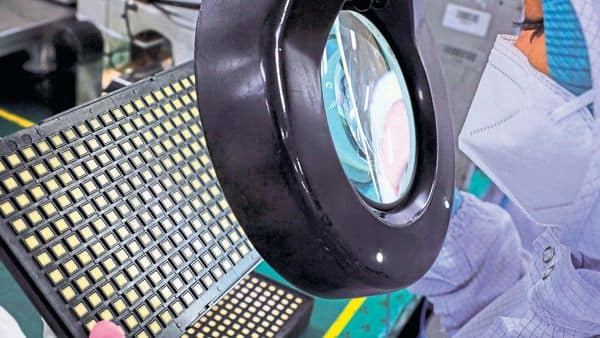 The production-linked incentives (PLI) will be offered to companies over six years, the government said after a cabinet meeting on Wednesday. It expects to attract investments worth ₹1.70 trillion for more than 20 units.

Two chipmakers and two display manufacturers are expected to set up units in the next four years under the plan, a government official said, adding that each of them will invest ₹30,000-50,000 crore. Further, 20 companies, including chip packaging firms and compound semiconductor companies that make chips for the automotive sector, power equipment, etc., are expected to be operational in three years, with investments in the range of ₹3,000-5,000 crore.

India seeks to reshape supply chains to cut its reliance on China amid a global chip shortage that has impacted the production of goods ranging from cars to computers. The government has already asked local carmakers to reduce electronics imports from China.

“In the current geopolitical scenario, trusted sources of semiconductors and displays hold strategic importance and are key to the security of critical information infrastructure,” the ministry of electronics and information technology said in a statement on Wednesday.

The government hopes the incentive plan will facilitate the production of critical components used in automobiles and mobile phones locally. In addition, incentives provided under the scheme will help design, fabricate, pack and test the semiconductor chips and develop a complete ecosystem.

“The demand-supply gap was widening by the day, disrupting the supply chain and increasing overall manufacturing costs. The red carpet rolled out by the cabinet can make India not only self-sufficient but also a global supplier of chips,” said Kulraj Ashpnani, PLI specialist at Dhruva Advisors.

Under the scheme, the government will extend financial support of up to 50% of the project cost to firms selected to set up semiconductor and display fabs in India. It will also work closely with states to establish high-tech clusters with requisite infrastructure such as land, semiconductor-grade water, high-quality power, logistics and research ecosystem to house the fabs.

“Any country that does not learn to make wafers (semiconductors) will lag behind others in the days to come. Any economy that does not have control over semiconductors, quality and design and does not have a focus on talent development will not be able to move forward,” communications and information technology minister Ashwini Vaishnaw told reporters, underlining the importance of the incentive plan.

The government will also provide support of up to 30% of capital expenditure for setting up compound semiconductors and semiconductor packaging facilities. It expects at least 15 such units to be established with its support.

Support will also be provided to 100 local companies engaged in semiconductor design for integrated circuits, chipsets, system on chips (SoCs), systems and IP cores and semiconductor-linked design. The government added that this scheme would enable the growth of at least 20 such companies that can achieve a turnover of more than ₹1,500 crore in the coming five years.

Further, an India Semiconductor Mission led by global experts in the semiconductor and display industry will be set up to act as a nodal agency for efficient and smooth implementation of the schemes and long-term strategies for developing sustainable semiconductors and display ecosystem.

The cabinet also approved a proposal to modernize and commercialize semiconductor laboratories, including exploring a joint venture with a commercial fab partner.

“We expect an investment of around ₹1.70 trillion in the next four years. There are proposals already in the pipeline. We expect projects for compound semiconductors to roll out in the next 3-4 months. In the medium term of two to four years, four big semiconductor fabrication plants will be in place,” Vaishnaw said.

He said India’s electronics manufacturing ecosystem, which was negligible once, has reached ₹5.33 trillion in FY21 and may cross ₹22 trillion in four-five years.

Massive digitization following the pandemic outbreak drove up demand for chips and led to a supply chain imbalance, the minister said, adding the industry expects things to return to normalcy in six to eight months.

The industry welcomed the announcement since the shortage of semiconductors has severely impacted the production of automobiles and electronic goods, crimping demand at a time India’s economic recovery was gaining pace.

“We appreciate the government’s effort to understand and recognize industry’s demands and envisioning a time-bound incentive-led vision that will help the industry with every aspect—from design and fabrication to packing and testing,” industry body Nasscom said in a statement.

“While India should assemble everything possible in the globe and export to the entire world, the building blocks of the electronic ecosystem, which is display and semiconductor ecosystem, are critical for long-term sustenance,” said Pankaj Mohindroo, chairman of the Indian Cellular and Electronics Association.

“It will be imperative that necessary permission to establish the industry is given with the same swiftness. There is current and potential demand, and hence India must not miss the boat,” said Sandeep Shah, managing partner at NA Shah Associates LLP.