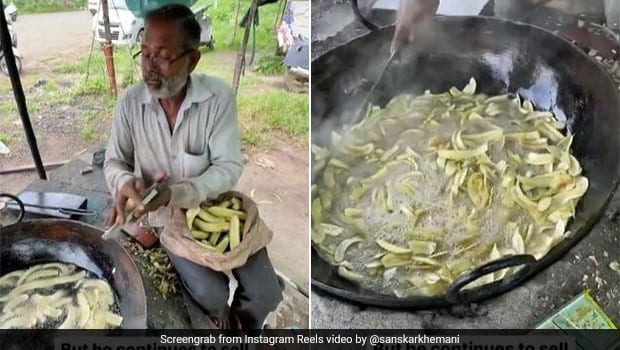 The internet often captures some incredibly moving stories which tug at our heartstrings. Remember the elderly couple from Delhi’s ‘Baba Ka Dhaba’ who had gone viral last year? Their heart-wrenching plight caught the attention of internet users with plenty of support pouring in for the octogenarians. And now, a similar story of a banana chips seller in Nashik, Maharashtra has surfaced online. The visually impaired man seems to be quite old and continues to make and sell banana chips even till today. Take a look at the full video here:

The video was shared on Instagram Reels by food blogger @sanskarkhemani, where it has received over 13 million views and 805k likes as of today. The viral video received an outpouring of support and was widely circulated on social media.

In the short clip, we can see the old banana chips seller located on Makhmalabad Road, Nashik. He is grating banana and frying it in a deep griddle in hot oil while sprinkling salt on top. The caption of the video reveals that he lost his eyesight from the heat and steam emanating from the vessel. However, he continues to sell banana chips to earn a living. “If you know anyone in Nashik ask them to buy banana chips from this old man. Together we all can help him to get his eyesight back,” wrote the blogger in the caption of the video.

Instagram users reacted to the video of the banana chips seller. Several users praised his hard work and dedication to the art of cooking banana chips. “May God bless him and give him all the strength,” wrote one user while another said, “Can feel his love for cooking!”

What did you think of the viral video? Tell us in the comments below.