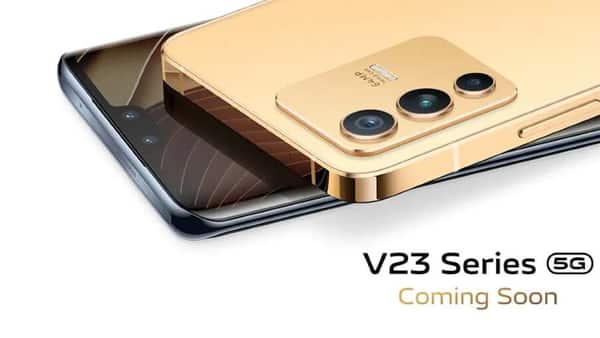 The much-awaited Vivo V23 5G series will be launched in India next week – January 5 – featuring the company’s Vivo V23 5G and Vivo V23 Pro 5G smartphones. The Vivo V23 Pro is rumoured to be touted as “India’s slimmest 3D curve display smartphone at 7.36mm” at launch.

The official teaser video of the Vivo V23 5G series was aired in India during a sports match teasing both phones as “coming soon.”

The V23 series will reportedly come with India’s ‘first 50MP eye autofocus dual selfie camera’, along with an 8MP shooter. The Vivo V23 might feature a 64MP primary shooter along with an 8MP ultra-wide camera, and a 2MP macro camera.

Vivo is yet to reveal the handsets, but the colour options of Vivo V23 5G series phones have been tipped online.

According to the official promo video, V23 and V23 Pro could be available in Sunshine Gold and Stardust Black colour options.

The handset will reportedly sport a 6.44-inch full-HD+ AMOLED display with a 90Hz refresh rate.

The handset is said to come with a 3D curved screen featuring a 6.56-inch AMOLED display with a 90Hz refresh rate.