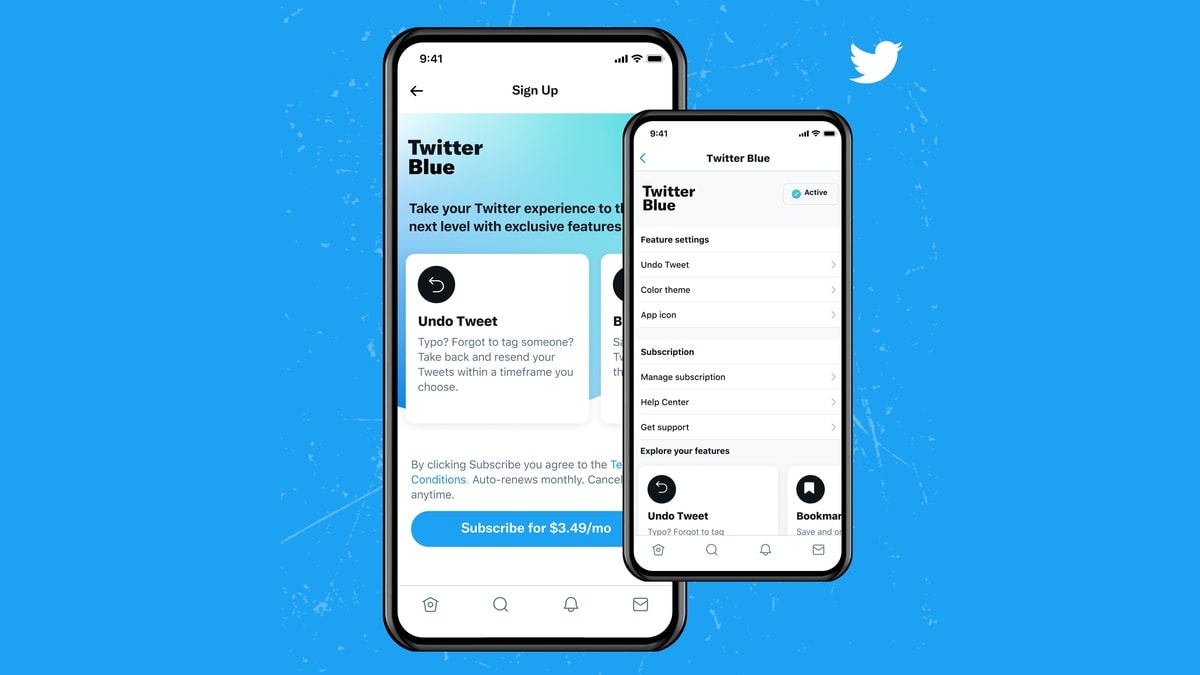 Twitter Blue is now rolling out to users in the United States and New Zealand, the company announced on Tuesday. The subscription service offered by the microblogging platform brings in a host of features such as the ability to undo tweets and reading some news articles without advertisements, among others. With Twitter Blue subscriptions, the social media giant is looking to diversify its revenue sources.

Twitter Blue, which will cost $2.99 (roughly Rs. 222) per month in the US, will now include the ability to read some news articles without ads, upload longer videos and customise the navigation bar in the Twitter app.

It’s time to flex those Twitter fingers and take it to the next level ????

Twitter Blue is now available for subscription in the US, New Zealand, Canada, and Australia on iOS, Android, and web pic.twitter.com/if3wXfoGpB

One of the most handy features of Twitter Blue is the ability to undo tweets. With this, subscribers will have a time limit of 60 seconds to preview and make changes to a tweet before it’s made public. While Twitter still hasn’t introduced a much-demanded “Edit Tweet” feature, the ability to undo tweets before posting may help users avoid unwanted typos or other errors in their posts, as pointed out by renowned sci-fi author John Scalzi.

So far the most noticeable thing is after I press the “tweet” button, a 20-second timer (by default, it’s extendable) starts running, so if I see a typo I can recall the tweet before it posts in order to fix the error. NOTE: I’m still going to make typos, sorry.

The San Francisco-based company, which earns most of its money by selling advertising, is eyeing more consistent sources of revenue by selling access to certain features to heavy Twitter users who flock to the site for news and current events.

Turns out you CAN scroll forever. Support journalism while getting an ad-free reading experience on some US-based publishers’ websites. Look for the “Ad-free with Twitter Blue” label in your timeline. Paywall access not included pic.twitter.com/AmWh7WShXA

Subscribers can also pin important conversations to the top of the messaging inbox and change the colour theme of their Twitter app. Users can also post longer videos (up to 10 minutes) on the Web.

Get early access to the features we’re testing with Labs. Right now: Pinned Conversations for your DM inbox on iOS, and longer video uploads up to 10 minutes on web pic.twitter.com/Wfz4iYWMti

Ready to go for it? Here’s how to sign up:

After payment, you’ll have access to some of the next-level features (which vary by device) and more in this hot thread ????

Twitter began rolling out the subscription service in June, launching it first in Canada and Australia. The company declined to say how many subscribers it has.