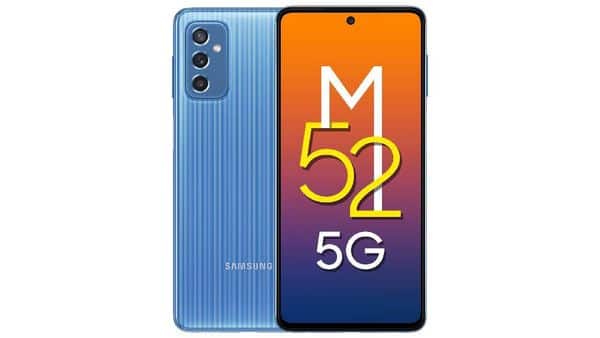 The Korean tech giant claims this is its sleekest M-series smartphone yet, and is 21 per cent thinner than its predecessor. Samsung Galaxy M52 5G will be available in two colours options – Icy Blue and Blazing Black.

Samsung Galaxy M52 5G comes equipped with Qualcomm Snapdragon 778G based on the 6nm architecture. It has been coupled with 128GB of internal storage and 6GB or 8GB of RAM. Galaxy M52 5G comes with Android 11 OS out of the box with One UI 3.1 interface on top.

The screen on the Galaxy M52 5G is 6.7-inch FHD+ sAMOLED+ Infinity-O display. The panel also has a high refresh rate of 120Hz. The device has Dolby Atmos enabled for superior sound quality on a wired or Bluetooth headset.

The camera set-up on the back feature three sensors vertically stacked one above another, whereas the front is housed in a holepunch cutout at the top-centre of the display. The rear camera set-up has a 64MP main camera, 12MP ultra-wide camera and a 5MP macro lens. The front camera is a 32MP shooter.

The Galaxy M52 5G boasts a 5,000 mAh battery that Samsung claims is good for 81 hours of music playtime, up to 48 hours of voice calls and 20 hours of video playtime. The device also comes with 25W fast charging.

Samsung Galaxy M52 5G comes with Knox Security. The Alt Z feature allows users top switch between their public and private modes with just a double click of the side button. The device also gets Samsung Pay, the in-house NFC-based digital payment feature.

Samsung Galaxy M52 5G prices start at ₹29,999 for the 6GB variant, whereas the 8GB version has been priced at ₹31,999. The device will be available on Samsung.com, Amazon.in, leading online portals and select retail stores.

Samsung is also running introductory offers for Galaxy M52 5G. It will be available at ₹26,999 and ₹28,999 for 6GB and 8GB variants, respectively at the beginning of the Great Indian Festival on Amazon.