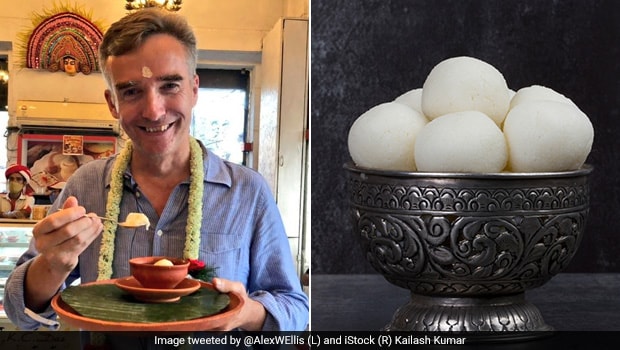 Kolkata is home to some of the culinary delights for foodies all over the country. Whether it’s the crispy street-style rolls or the tangy Jhal Muri, there is so much to choose from. Recently, industrialist Harsh Goenka took to Twitter to call the city’s street food the best in the country. The British High Commissioner to India, Alex Ellis, visited Kolkata and tried one of the famous sweets of the city – the Rasgulla. Take a look at the photo he shared:

“I am very happy to be in Kolkata, the sweetest city in India. K. of the Esplanade here. C. At Das’s outlet, I tasted “Banglar Rasgolla” with great taste,” he wrote in Bengali on Twitter. The outlet he was referring to was K.C. Das, one of the most popular eateries in the city. Alex Ellis was enjoying the sweet treat from a clay pot with a big smile on his face. He had been greeted with a garland and a tika on his visit.

Desi Twitter users expressed their surprise and happiness on seeing the British High Commissioner in Kolkata. Several requested him to try some other famous sweets and dishes of the city.

I hope you like it and welcome to Kolkata.— Sandipan Banerjee (@im_sandipan) September 26, 2021

Nothing beats kolkata street food also, hope you can try some of it :)— Smita Sharma (@Smita_Sharma) September 26, 2021

The internet is no stranger to the food sojourns of the High Commissioner. On his previous visits to other cities of India, Ellis had tried the local cuisines in the local style. Those who follow him closely would recall his visit to Bengaluru where he tried the delicious Mysore Masala Dosa. After a Twitter poll, he decided to ditch his knife and fork and eat the dosa with his hands. Similarly, Alex Ellis was recently in Mumbai where he tried the signature street food Vada Pav and even got a gift from Mumbai’s famous dabbawallas. Take a look:

What city do you think Alex Ellis will visit next? Tell us what you think in the comments below.