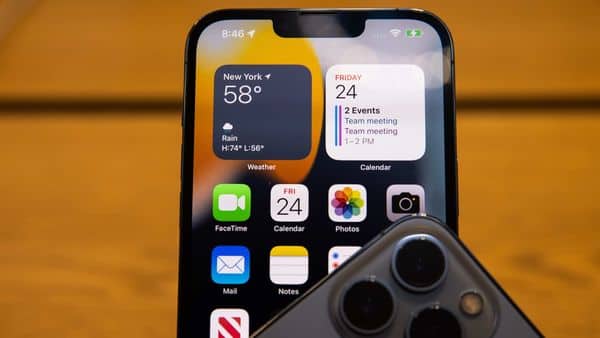 Apple iPhone 13 line-up was launched only last month, but reports and rumours about the iPhone 14 are already doing the rounds. Last month, we saw a reports on the next-generation of iPhones trading the notch at the top of the screen for a punch-hole cutout. Now a recent report has claimed that some iPhone 14 models will get a 2TB storage option.

The 1TB storage option was introduced for the first time ever in iPhones with the iPhone 13 Pro models, twice than the 512GB storage seen on iPhone 12 Pro phones.

Several reports claim the Apple iPhone 14 series will come with double the maximum storage available on this year’s iPhone 13 lineup. However, it is likely storage update will be restricted only to the iPhone 14 Pro models.

After a iterative update this year, iPhones are expected to see major changes in their next version, with refreshed design and size options. Going by Apple’s usual update calendar, the iPhone 14 is likely to be launched in September 2022.

Given the huge capacity, the 2TB storage options is likely to be reserved for the ‘Pro’ models. The vanilla iPhone 14 and iPhone 14 Max might get up to 1TB storage, which would be twice the 512GB that is offered right now on the iPhone 13.

While 2TB of storage on a smartphone might seem to be overkill by a huge margin, the upcoming iPhone’s camera features might demand the added storage space. The current iPhone 13 Pro lineup only lets you shoot 4K ProRes footage at 30fps on 256GB variant and above.

The 128GB iPhone 13 Pro models are restricted to 1080p ProRes footage at 30fps. However, given how early this rumour has found us, a disclaimer should be issued that this might not translate into reality.