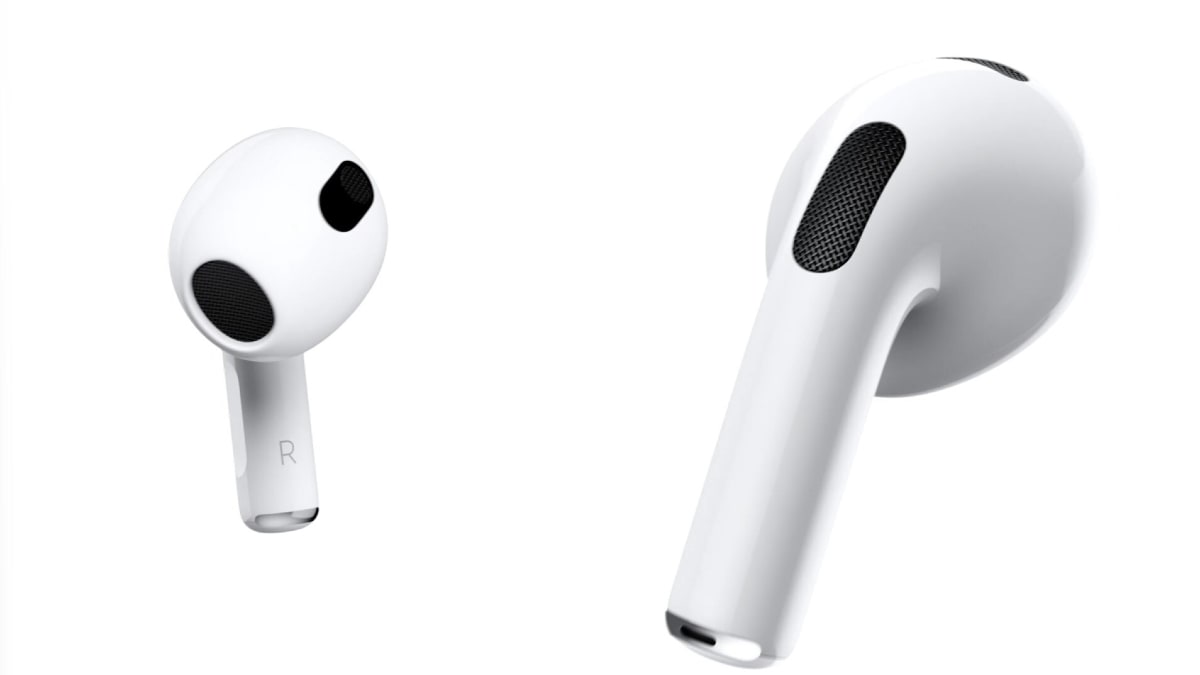 Apple at its ‘Unleashed’ event on Monday unveiled the third-generation AirPods aka AirPods (3rd Generation). The new entry-level AirPods are the successor to the AirPods 2 that were unveiled in March 2019. Unlike the earlier model, or the original AirPods that were launched back in 2016, the Apple AirPods (3rd Generation) come with an upgraded design that looks quite similar to that of the AirPods Pro. There are shorter stems to provide a better grip and improved ergonomics. The next-generation AirPods also come with a wireless charging case as standard that supports Apple’s MagSafe. In addition to the new AirPods, Apple brought the Apple Music Voice service and new HomePod mini colour options, namely Blue, Orange, and Yellow.

Apple AirPods (3rd Generation) price in India is set at Rs. 18,500. The new truly wireless stereo (TWS) earbuds will be available for orders in the country through the Apple India Online Store starting Monday and will go on sale from Tuesday, October 26. In the US, the new AirPods will be available at $179 (roughly Rs. 13,500). The earbuds will also be available in more than 26 other countries and regions starting Tuesday.

Alongside the AirPods (3rd Generation), Apple brought the HomePod mini in Blue, Orange, and Yellow colours in addition to White and Grey. The new colour options will be available through the Apple India Online Store and through Apple Authorise Resellers in November.

The most noticeable and significant change that the Apple AirPods (3rd Generation) bring is the AirPods Pro-like design. The earbuds are also come with a Force sensor for pressure controls — just like the AirPods Pro. Further, the AirPods (3rd Generation) — just like the last model — include hands-free ‘Hey Siri’ voice assistant feature. There is also support for Dolby Atmos in Apple Music. The new model also brings a custom driver and a high dynamic range amplifier that both are touted to enhance bass output and deliver clean high frequencies.

Apple has provided support for AAC-ELD codec to deliver full HD voice quality for FaceTime calls. There is also Adaptive EQ support that is claimed to help tune sound in real time based on how AirPods fit in the user’s ear. Further, the AirPods (3rd Generation) include Spatial audio with dynamic head tracking — the technology that was earlier available on the AirPods Pro and AirPods Max.

The new AirPods also include a skin-detect sensor that is claimed to help accurately discern if the earbuds are in the ear or in a pocket or on a table and pause playback when removed.

On the battery front, Apple claims that the AirPods (3rd Generation) deliver an additional hour of battery life over the previous generations, with up to six hours of listening time and up to four hours of talk time. There is also wireless charging support on the bundled case that supports MagSafe protocol. Additionally, the AirPods (3rd Generation) is rated to deliver about an hour of battery life in just five minutes of charging. Users will also get 30 hours of total listening time with four additional charges in the case.

Alongside the new AirPods, Apple at its virtual event introduced Apple Music Voice as the new subscription-based plan that will be available at Rs. 49 ($4.99 in the US) a month. It will be available specifically for users accessing Apple Music using Siri. The new plan will initially be available in 17 countries worldwide, namely Australia, Austria, Canada, China Mainland, France, Germany, Hong Kong, India, Ireland, Italy, Japan, Mexico, New Zealand, Spain, Taiwan, the US, and UK. It will sit alongside the existing Individual and Family plans and will be available for access across all Apple devices for one user account.